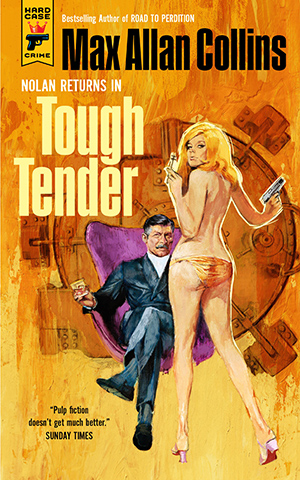 Has Nolan met his match? MWA Grandmaster Max Allan Collins’ veteran thief faces off against a cold-blooded femme fatale in this double-length adventure originally published as two complete novels and unavailable in stores for three decades.

SOMETIMES YOU BURY THE PAST.

SOMETIMES IT BURIES YOU.

Every professional thief knows you never return to the scene of a crime. But what if you’re forced to?

In this intense heist story – appearing in bookstores for the first time in three decades – MWA Grandmaster Max Allan Collins brings veteran thief Nolan and his young partner in crime Jon back to rob the same bank they targeted in their debut novel, Two for the Money, at the behest of an embezzling executive and a femme fatale with dollar signs where her soul should be. And those aren’t the only figures resurfacing from the past either – the ruthless Comfort clan is back to even old scores, and some members of the Outfit are packing bullets with Nolan’s name on them. With all these forces marshalled against him, can even the toughest professional hardcase come out on top?

“One of the most memorable femme fatales in hard-boiled fiction.” –Booklist