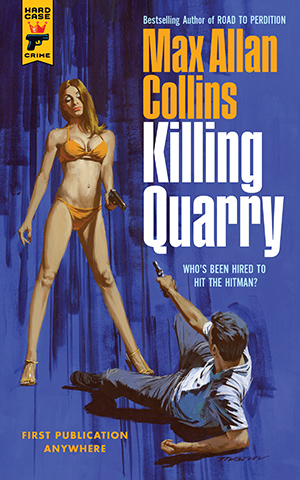 WHO PUT QUARRY IN THE CROSSHAIRS?

Formerly a Marine sniper in Vietnam, the man known professionally as Quarry has spent the past decade killing for money, first in the service of an agent called the Broker, and then as a freelance hitman. But he’s always been on the right side of those contract kills—until now.

It seems someone has taken out a contract on Quarry himself. But who? And why? And how does a mysterious figure from his past figure in? Quarry will find the answer—or die trying.

Since his first appearance in 1976, Quarry has been the star of a Cinemax TV series, a graphic novel (Quarry’s War), and a dozen other novels. But he’s never faced an assignment deadlier or more personal than this...

Publisher’s Weekly: “Irresistible ... It’s Lu’s presence, and the dash of romance she brings, that really energizes this entry ... Collins maintains a tension between the two that’s resolved only on the final page. One of the book’s great pleasures is the humorless Quarry’s deadpan narration, whether he’s describing a pragmatic sexual encounter or exactly how a carefully planned hit can suddenly go off the rails. Newcomers and established fans alike will be happily drawn into Quarry’s cold-blooded criminal world.”

Booklist: “A thoroughly entertaining pas de deux, evoking Richard Condon’s classic Prizzi’s Honor (1982), in which Quarry and Lu come together as lovers and co-conspirators, despite neither one being sure who will try to kill the other first. The seventies backdrop, complete with cavorting and bloodletting at a former Playboy resort, only adds to the time-capsule ambience of this pulpy pleasure trip.”

Book Reporter: “This instant classic has something for everybody ... I wouldn’t mind a bit if this series, which harkens back to a past and better era, went on forever.”

Crime Fiction Lover: “Killing Quarry is a lean beast at barely 200 pages, with not a word wasted. And yet despite its emphasis an action and drama, Collins is able to make his characters come alive. This novel is more than blood and thunder – though Collins makes sure our genre expectations are met – there is deft characterisation present too. The interaction between Quarry and Lucille as they try to parse each other’s motivations is a particular highlight ... Great fun from start to finish.”

Interview about the Quarry series with Hard Case Crime editor Charles Ardai from Geeks A Gogo.