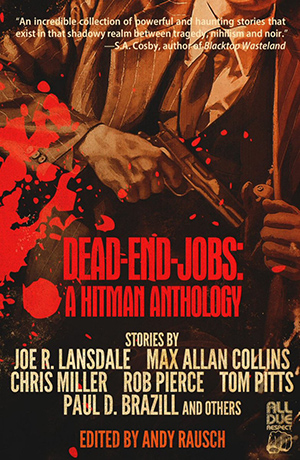 Contract killers have long been a point of interest for readers of crime fiction and action film fans. Dead-End Jobs: A Hitman Anthology offers up eighteen works of short fiction from some of the hottest writers in the business. While the stories all depict professional killers, they are wildly different in their tone and the styles in which they are written, as well as the way they are depicted and the point-of-view from which they’re told.

Some of these killers are seasoned professionals and others are new to the killing game. Some stories find their settings in urban locales such as New York City or Los Angeles and others in backwater rural locations. There are also contract killers of every stripe. Some stories depict the traditional organized crime gunmen while others feature corner boys doing the bidding of neighborhood drug dealers and the like. The stories in this collection are fast-paced and action-packed.

Just as there are contract killers of varying pedigrees here, Dead-End Jobs features the writing of veteran wordsmiths such as Joe R. Lansdale, Max Allan Collins, and Stephen Spignesi, as well as new but equally exciting writers. Each author in this collection is as skilled as the hitters depicted in the stories. But their weapons are words instead of rifles and pistols, and every one absolutely kills here.

“An incredible collection of powerful and haunting stories that exist in that shadowy realm between tragedy, nihilism and noir.” —S.A. Cosby, author of Blacktop Wasteland