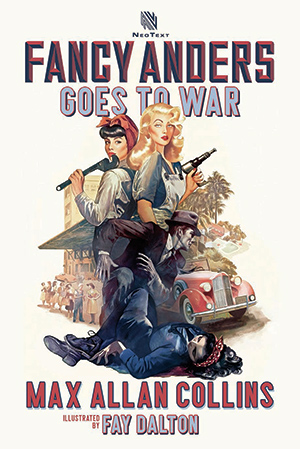 Fancy Anders goes undercover at an aircraft plant to solve the murder of Rosie the Riveter in the first of three thrilling mysteries by Road to Perdition creator Max Allan Collins, with stunning illustrations by award-winning artist Fay Dalton.

Fall 1942. When her Hollywood private detective daddy is called back to uniform, Fancy Anders is issued orders of her own – answer the phone, make referrals, and keep the place dusted. But the 24-year-old Barnard grad – whose hobbies include shooting, flying and jujitsu – isn’t having any.

At Amalgamated Aircraft, a young female worker chosen to pose for patriotic photos and posters has met with a suspicious “accidental death.” Fancy takes the victim’s place on the swing shift, fitting in well with co-workers very much not from high society circles. With the occasional reluctant help of LAPD homicide cop Rick Hinder, Fancy takes a hammer to the head of a saboteur, sniffs out an enemy within, and sets out to prevent an assassination attempt on President Roosevelt, scheduled to tour the plant and greet the women who work long, hard hours for the war effort.

Portraying the times vividly with his usual historical accuracy, Mystery Writers of America grandmaster Max Allan Collins creates a compelling new series protagonist both indelibly of her time, and far ahead of it. Lavishly illustrated by James Bond artist Fay Dalton.