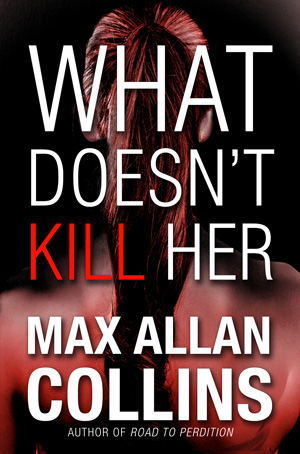 "What Doesn't Kill Her is a kick-ass thrill ride from page one. This is the American answer to The Girl With the Dragon Tattoo." —John Gilstrap, author of High Treason and Damage Control

Jordan Rivera is an ordinary kid with an ordinary family, until a vicious killer takes it all away, sparing her, but leaving her broken. The murders of her father, mother, and brother destroy something inside Jordan, who spends ten long, mute years in an institution. Catching a glimpse of a news report about another family slaying, Jordan at last breaks her silence. Now she’s out, and she molds herself—body and mind—into an instrument of justice.

While a young detective pursues the case on his own, Jordan teams up with members of her support group, people like her, damaged by violent crime. They have their own stories of pain, heartache, and vengeance denied. With their help, Jordan will track down the killer before he can ravage any more lives. Her live—and her sanity—depends on it.

Booklist: “riveting” “the ride offers sure thrills, and the company is great.”

Bookgasm: “Leave it to the prolific, imaginative mind of Max Allan Collins to demythologize the overused serial-killer trope, correct several misconceptions about it, and at the same time produce a solid, suspenseful, stand-alone thriller. These are among the several reasons why you shouldn’t miss What Doesn’t Kill Her.” “[What Doesn’t Kill Her] has more than its share of unexpected twists and white-knuckle anticipation.” “superb”

Crimespree: “Hold on to your hat…[the] action starts on page one and doesn’t stop until the very last page.”

The Beachcomber: “compulsively readable…a protagonist (or two) you actually give a damn about and a storyteller who’s prolific and skillful.”

Bill Crider‘s Pop Culture Magazine: “This is a fast-moving story with attractive lead characters that you'll be rooting for all the way. The members of the support group are also a very likable crew, bound together by a common goal and their separate violent pasts. All this, and Collins has a real shocker in store for you at the end. Check it out.”

Not The Baseball Pitcher: “Another winner from a fine writer.”

Ed Gorman: “fresh and compelling…Max [Allan] Collins at his best.”

Curiosity of a Misfit: “What we have here is a book by the master of the thriller.”

Bevboy's Blog: “[What Doesn’t Kill Her] kept me on the edge of my seat.”