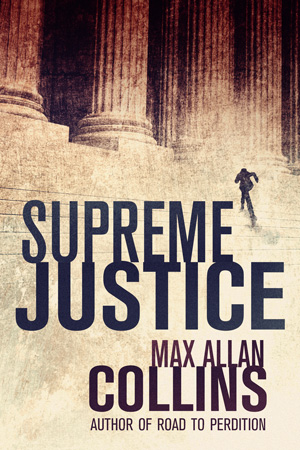 After taking a bullet for his commander-in-chief, Secret Service agent Joseph Reeder is a hero. But his outspoken criticism of the president he saved—who had stacked the Supreme Court with hard-right justices to overturn Roe v. Wade, amp up the Patriot Act, and shred the First Amendment—put Reeder at odds with the Service’s apolitical nature, making him an outcast.

FBI agent Patti Rogers finds herself paired with the unpopular former agent on a task force investigating the killing of Supreme Court Justice Henry Venter. Reeder—nicknamed “Peep” for his unparalleled skills at reading body language—makes a startling discovery while reviewing a security tape: the shooting was premeditated, not a botched robbery. Even more chilling, the controversial Venter may not be the only justice targeted for death...

Is a mastermind mounting an unprecedented judicial coup aimed at replacing ultra-conservative justices with a new liberal majority? To crack the conspiracy and save the lives of not just the justices but also Reeder’s own family, rising star Rogers and legendary investigator Reeder must push their skills—and themselves—to the limit.

Booklist: “a spiky thriller with a fine inside-the-Beltway sensibility.”

5 Minutes for Mom: “masterful...a great page turner, one of the books where I keep telling myself that ‘I’ll just read one more chapter’”

Reading Reality: A-. “The story was so tight and the point-of-view character had just the right touch of baddassery/snarkitude that I poured through it in one evening.”

A Bookish Way of Life: “Supreme Justice is the perfect mystery/thriller to get lost in this summer.”

Not the Baseball Pitcher: “[Supreme Justice] doesn’t let go once it sucks you in”

King Haris: “The pacing is excellent, and the prose is tight…Recommended.”

Kingdom Books: “Collins's trademark pacing and dialogue (built effectively and cleverly over a story treatment he credits to Clemens) makes Supreme Justice a compelling and intriguing read, raising tough questions about our national government while knotting all the threads of plot and character into a classic action investigation.”

Near Future, Far Right: an interview with Max Allan Collins, author of "Supreme Justice" from Wag the Fox. July 14, 2014.