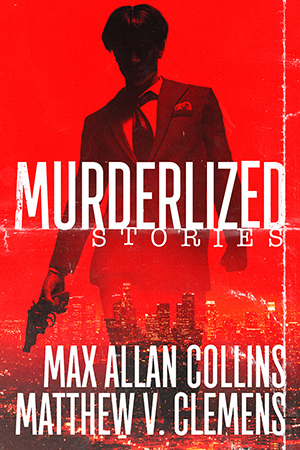 A COLLECTION OF EXCITING, SUSPENSEFUL TALES.

The title story, Murderlized, finds Moe Howard of The Three Stooges playing amateur private eye in Hollywood of 1937, solving the murder of the man the comedy team “stooged” for, Ted Healy.

Moe isn’t the only unlikely detective in the short story collection, as famed writer Damon Runyon seeks The Devil’s Face and a young female detective and her rough-and-tumble partner are Out for Blood.

Max Allan Collins and Matthew V. Clemens, whose collaborations include the bestselling CSI novels and the Reeder and Rogers series (Supreme Justice), collect eleven of their sometimes sexy, often violent, always exciting short stories, which range from police procedure to chilling horror, including the short story Lie Beside Me that was the first appearance of John Sand, star of Come Spy with Me.